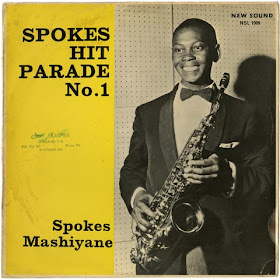 Next week marks 40 years since the untimely death of Spokes Mashiyane at the age of 39. The South African legend died of cirrhosis of the liver on February 9th, 1972 at Baragwanath Hospital in Soweto. Significantly last week marked the 79th anniversary of his birth. On this occasion it seems fitting to present two very rare issues by the renowned penny whistler and saxophonist — one (pictured above) released 50 years ago and the other perhaps his last recording.

An extensive discography for Spokes Mashiyane has been compiled in conjunction with this post and can be viewed at flatint. Many thanks to the team here at Electric Jive for help with that and also to Laurent Dalmasso who suggested the idea for this post.

Willard Cele introduced pennywhistle jive or what would later become known as kwela to South African audiences in the classic 1951 film The Magic Garden. Remarkably the commercial potential of this music was not evident and thus was not exploited by the record companies at the time. Subsequently no other recordings of this music were made until three years later with a track by the Orlando Tin Whistlers. (Rob Allingham in Lara Allen, Circuits of Recognition…) 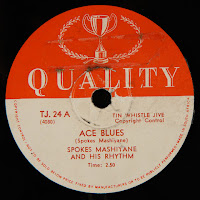 But it was Johannes 'Spokes' Mashiyane — more than any other — who would popularise this style of music and transform it into a household name starting with four tracks recorded for Trutone on October 8, 1954. One of those, Ace Blues, became a hit, and by 1955 was receiving favorable reviews in the black press. Soon every record company in South Africa was looking to capitalize on an instrument that had been regarded as a mere toy relegated to the rural life of young herd boys.

Of course the instrument’s history is more complex and elements of its 20th century use can be traced back to Scottish marching bands of the 1920s. Lara Allen’s excellent article Circuits of Recognition… elaborates on this subject in great detail and is well worth the read.

Spokes Mashiyane was born in Vlakfontein near Pretoria on January 20th 1933. According to the liner notes of his first Trutone EP, Mashiyane taught himself to play on a reed flute while tending his father’s cattle. Albert Ralulimi in an interview with Lara Allen reveals that Spokes first played on a plastic toy penny whistle before moving on to a metal one. When he was eighteen, Mashiyane moved to Johannesburg where he met Frans Pilane with whom he formed a duo. Together the two busked with flute and guitar on street corners and in parks. Ralulimi goes on to say that Mashiyane's style at the time improvised on grassroots tunes played by "anybody" - the community in general, kids on street corners, and those at shebeens and stokvel gatherings.

It was on one such occasion at Zoo Lake Park (Yvonne Huskisson has it at Phomolong Train Station) that the duo was spotted by Trutone producer and talent scout Strike Vilakazi. According to Rob Allingham, Vilakazi cut at least four tracks with them in 1954: Ace Blues (4080) Kwela Spokes (4081), Skokiaan (4082) and Meva (4083). Huskisson, on the other hand, does suggest that Mashiyane’s first recordings were made in 1949. He would have been sixteen at the time and given that Allen’s account has him moving to Johannesburg when he was eighteen, the earlier recordings may be unlikely.

While penny whistle recordings were popular amongst black consumers in South Africa between 1954 and 1958, two events in 1958 helped propel this style of music onto the international stage and subsequently elevated its stature with white consumers, as Lara Allen points out. One was the UK television show, The Killing Stones, which featured as its theme Elias Lerole’s Tom Hark (Columbia YE 164); and the other was the recording of Spokes Mashiyane and touring American bop pianist Claude Williamson.

In April 1958, Trutone arranged for a collaborative recording with Mashiyane and the Claude Williamson Trio who were touring the country with Bud Shank as the “Jazz West Coast No. 3” at the time. The concert took place at the Bantu Men’s Social Centre (BMSC) and the live recording produced at least two tracks with Mashiyane, Kwela Claude and Sheshisa!

While EMI did well marketing Tom Hark, Trutone did a better job of further branding Mashiyane by exploiting the American connection with the Claude Williamson Trio and transforming him into an “instant celebrity”. 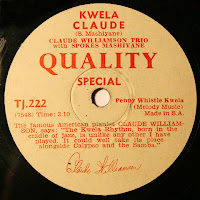 Allen goes on to say: “Trutone's aggressive marketing included billing Mashiyane as 'King Kwela', and printing his picture on record labels; it was the first time a South African record company had lavished such extensive publicity on a black musician. Although it was unprecedented to print comments on record labels of 78s aimed at black consumers, the "Kwela Claude" label declares: "The famous American pianist CLAUDE WILLIAMSON, says: "The Kwela Rhythm, born in the craddle of jazz, is unlike any other I have played. It could well take its place alongside Calypso and the Samba.""" (Allen) 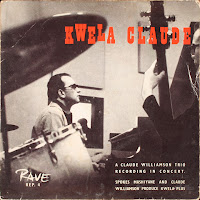 Such successful marketing certainly helped raise the prestige of kwela and Mashiyane at the time. Trutone issued copies of Kwela Claude not only on its Quality label but also on its Rave label. This is significant in South Africa in that Quality records were typically marketed to black consumers while Rave records were marketed to white consumers. The EP Kwela Claude (Rave, REP 4) is the first to feature a black artist in such a significant profile on a Rave release. 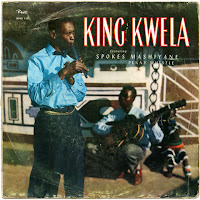 Likewise Mashiyane’s first full-length album, King Kwela (Rave, RMG 1107), issued around 1958 or 1959, became the first long-playing record to feature exclusively a single black artist. Most recordings by black musicians until that point were issued on 78 rpm. If black music appeared on compilation LPs, it was usually marketed to white consumers or intended for international export. Issued on the Trutone’s Rave label, it is likely that King Kwela was also being marketed in this way. Though a full length LP, King Kwela is still a compilation of previously issued 78 rpm tracks. 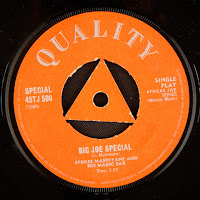 1958 also marked another watershed moment in Mashiyane’s brilliant career. Trutone producer Strike Vilakazi persuaded Mashiyane to take up the saxophone and apply his penny whistle techniques to the instrument. Big Joe Special (Quality, TJ 500) recorded that year, was one of the early results of the saxophone experiment. As with his earlier Ace Blues, Big Joe Special was a sales phenomenon. The record became the trendsetting hit of that year and would inspire a whole new style of music. Sax jive — latter called mbaqanga — would dominate South African urban music for the next twenty years. In many ways this track marks the beginning of the eventual decline of not only the majuba big band jazz era (see Majuba Jazz on Electric Jive) but also penny whistle kwela itself. Younger consumers were looking for faster, heavier sounds and mbaqanga would soon satisfy those desires.

Trutone’s success with Mashiyane was extremely lucrative for the company, yet they continued to pay Mashiyane a flat fee for his recordings ranging from seven to fifty dollars per record. David Coplan mentions that after Mashiyane pressed the company on royalties he was assaulted by thugs. It is no surprise then that the musician was subsequently lured away by Gallo Records in 1958. Under a deal brokered by Union Artists with Gallo, Mashiyane became the first black musician in South Africa to receive royalties from his recordings. 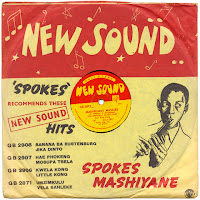 Gallo picked up where Trutone left off and continued the extensive marketing of Mashiyane. Gallo’s New Sound label, with whom Mashiyane was recording, donned their all-to-familiar record sleeves with his image and a listing advertising his other recordings. View Chris Albertyn's two posts on some of the New Sound 78 rpm recordings here and here at Electric Jive.

In 1959 another full-length album Spokes of Africa was issued. Mashiyane's second, this LP to my knowledge was also the second for any black artist. Gallo’s New Sound label then launched an excellent series of LP records around late 1959 or early 1960. The first being New Sounds of Africa (NSL 1001) a compilation LP with Mashiyane, Miriam Makeba and the Skylarks but almost exclusively featured tracks by Mashiyane. This series would go on to included the classic 1962 Castle lager Jazz Festival (NSL 1010) and the highly acclaimed and collectable Chris McGregor and his Castle Lager Big Band (NSL 1011). Of the eight LPs that I am familiar with from this series, Mashiyane appears on four and it is his Spokes Hit Parade No.1 (NSL 1009) that we feature on Electric Jive today. (Thanks to Sean Conlon for trading this into the flatinternational archive.) 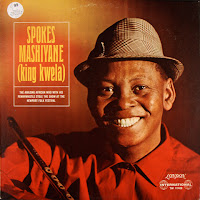 Mashiyane continued recording with Gallo throughout the early to mid 1960s. In July of 1965 he was invited to appear at the Newport Folk Festival in the United States where he “stole the show” according to the sleeve notes of his US issued LP, (King Kwela) (London, TW 91408). An August 7, 1965 article in Billboard Magazine remarks that "Spokes Mashiyane, from Johannesburg, South Africa, was an unscheduled treat. His swingy beat and flute captured the audience. He was the unexpected highlight of the Saturday night concert."

Murray Lerner’s film Festival documents the concert and includes footage of Mashiyane's performance. Watch a clip here. Note that Mashiyane is not the first performer but comes in towards the end of this clip at around 7 mins and 40 secs.

A number of Mashiyane recordings post-Newport reference his US visit, for example the tracks 5th Avenue and New York City (New Sound, GB 3617) not to mention New Port and America on his final LP.

Though Mashiyane is present at the birth of Gallo’s Mavuthela, his recordings for Gallo appear to taper off towards the later half of the 1960s. It is not clear to me why, but I suspect that the success of the hard-mbaqanga sound produced by Mavuthela during this period might have contributed to what appears to be a waning interest in Mashiyane.

Interestingly a 1969 compilation LP, the Golden City Album does include a mbaqanga styled sax jive by Mashyiane. The track is noticeable for two reasons: one, the title “The Return of Spokes” suggests an absence, and two the record is issued by Trutone not Gallo. Perhaps the “Return of Spokes” has a double meaning here, and could be interpreted in one of two ways: he is returning to recording or he is returning to Trutone. A recording with Trutone does suggest a break with Gallo. Moreover his next LP King of the Penny Whistle was produced by David Thekwane and issued by Teal Records. 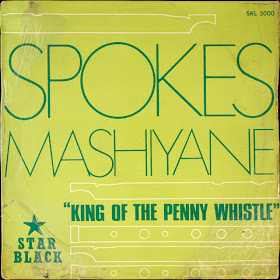 Released on Teal’s Star Black label (SKL 3000) (their first I believe) in 1969, Mashiyane here returns to the penny whistle, which for that time seems particularly unusual. The popularity of kwela had been waning since the late 1950s and with the rise of mbaqanga in the 1960s, it seemed that the style of music had all but been abandoned. Mashiyane here revisits in name at least some of his big hits like Ace Blues and TJ 500, the catalogue number for his first sax hit Big Joe Special. Surprisingly, he is backed by a band boasting a full elastic mbaqanga sound. My guess is that this is Mashiyane’s last album. It is also the second we are sharing today.

To view an extensive discography for Spokes Mashiyane visit flatint. 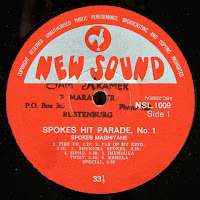 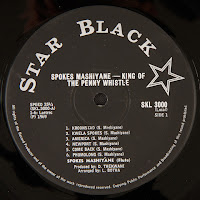