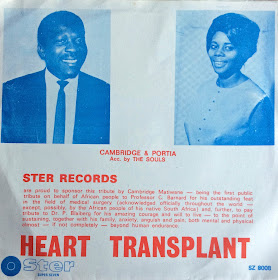 Its fifty years since Dr Christiaan Barnard performed the world’s first human heart transplant on 3 December 1967 in Cape Town. And yes, there were some interesting songs celebrating these extraordinary events and circumstances.

Like landing on the moon, the sheer sixties audacity  of a human heart transplant seized imaginations around the world.  Besides the science, people were also talking of the existential implications of first transplanting a woman’s heart into a man, and then, transplanting the heart of a “coloured” man into a “white man" - in South Africa!.

For the first transplant, Barnard realised that, given the numbers, there was a greater chance of a black donor heart becoming available – but he did not feel he could ask the apartheid-controlled authorities permission to transplant a black heart into the awaiting 55-year-old 'white' Louis Washkansky. As it turned out Washkansky received the heart of a 25-year-old white bank clerk, Denise Darval. He survived for 18 days and died of pneumonia.

It was the second heart transplant early in 1968 that crossed the line, so to speak. The world was really talking about the implications of Dr Barnard transplanting the heart of 24-year-old “coloured” Clive Haupt into 58-year-old “white” Dr Philip Blaaiberg. Here was a powerful metaphor that exposed the irony and injustice of apartheid for all to see and discuss. BJ Vorster had just succeeded Verwoerd as South Africa's Prime Minister, and separation of the races through forced removals and the homeland project had stepped up a further gear. 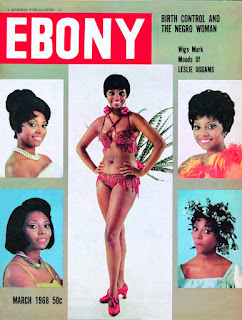 The March 1968 edition of Ebony Magazine in the USA had the following to say: “Clive Haupt’s heart will ride in the uncrowded train coaches marked “For Whites Only” instead of the crowded ones reserved for blacks. … It will enter fine restaurants, attend theatres and concerts and live in a decent home instead of in the tough slums where Haupt grew up. Haupt’s heart will literally go into hundreds of places where Haupt himself could not go because his skin was a little darker than that of Blaaiberg.”

The interesting article concludes: “Unfortunately, Dr Barnard’s marvelous heart transplants may well turn out to be just another proof that science has far outstripped sociology. We can’t hold science back. Now it is time that humanity caught up with it.”

At the turn of the 21st Century 30 to 40 heart transplants were carried out every year in South Africa. An interview with the heart surgeon Dr Willie Koen, who headed the Christiaan Barnard Memorial Hospital's heart transplant unit in 2009 said the transplant numbers had since dropped to only about 15 to 20 a year – due to costs and  a lack of donors.

However you may feel about heart transplants and how healthcare budgets are allocated and spent – there were two 1968 musical tributes (that I know of) to Dr Barnard’s achievements – from South Africa and Venezuela!

Cambridge Matiwane was a prolific producer, and here (after the Blaaiberg transplant) he teams up with Portia (last name unkown) to pen a soul-inspired tribute entitled “Heart Transplant”. The picture front cover of this 45rpm single (above) has the following to say: 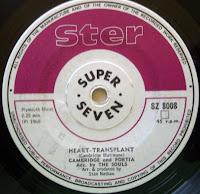 “Ster Records are proud to sponsor this tribute by Cambridge Matiwane – being the first public tribute on behalf of African people to Professor C. Barnard for his outstanding feat in medical surgery (acknowledged throughout the world  - except possibly by the African people of his native South Africa) and further to pay tribute to Dr P. Blaaiberg for his amazing courage and will to live - to the point of sustaining, together with his family, anxiety, anguish and pain, both mental and physical almost - if not completely - beyond human endurance." 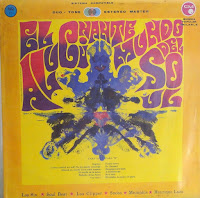 Have a listen – and, if you know of any other efforts from that time, please let us know.

The tracks are stored on Souncloud and can be downloaded from there. Click on the links below.