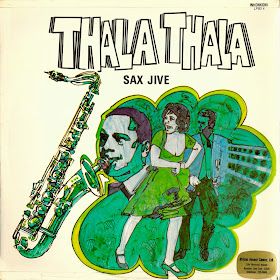 Electric Jive returns today to the delightful and infectious sound of South African sax jive. Thala Thala is a 1971 compilation LP that gathers together some of the biggest selling instrumental 45 rpm singles of the past year or two. The songs featured on this album are short, sweet, peppy and catchy - and if this LP doesn't get you up from your chair and dancing around the room, nothing else will! Thala Thala features a grand selection of sax jives (plus three accordion jives) from some of the greatest names of the era: Marks Mankwane & His Shaluza Boys, Sipho Bhengu & His Alto Sax, Big Voice Jack, Zwino Zwino Boys, Marubini and His Hot Shots, Mtabhane Ndima, and Noah Nduweni & His Sax. This album was released on the Inkonkoni label - which, at the time of release, was the most popular of the numerous Gallo-Mavuthela imprints.

The previous owner of this LP singled out Sipho Bhengu's "Tickey Dopies" and the Zwino Zwino Boys' "Tadima Tadima" as the two highlights with a black pen on the back cover. These two songs are certainly enjoyable (EJ readers may be aware that the former BBC Radio 1 DJ John Peel had a 45 rpm copy of "Tickey Dopies" in his vinyl collection) but, to my ears, there are several other songs on this LP that stand out much more than those two. Sipho's excellent sax jiving can also be heard in the rhythmic "Isaluti" that opens Thala Thala with a bang. "Auwa-Auwa", performed by Marks Mankwane & His Shaluza Boys, is quite frankly excellent. West Nkosi opens up the tune with a quick play of his harmonica (or "mouth organ") and Marks plays his lead guitar in that distinctive Marks way - but with the help of a wah-wah pedal. The two take turns soloing in this number (West solos on both the harmonica and his usual alto sax) and are backed effortlessly by the rest of Mavuthela's superb house band, the Makgona Tsohle Band.

Marks, West and the Makgona Tsohle Band return to perform "Marks Special No. 4". The band released "Marks Special" - a tune that showcased Marks' undeniably brilliant guitar skills - on single in 1969 and it was so successful that they recorded a follow-up titled "Marks Special No. 2". The third installment can be found on another Mavuthela sax jive compilation LP, Game 1 - Game 2 (1970). The fourth Marks Special here on Thala Thala spotlights Joseph Makwela's bass as much as it does Marks' lead guitar - Makwela actually plays the same iconic bass line he performed on the Mahotella Queens' smash hit single "Lilizela" a year prior. Vivian Ngubane's iconic rhythm guitar is strangely lost in the mix on "Marks Special No. 4" but it shines very much so on Mtabhane Ndima's "Emahlanzini", a repetitive but enjoyable early accordion jive from one of the masters of the style.

Vivian Ngubane was the first to set a template that other rhythm guitarists innovated upon. Marubini  Sam Jagome, inspired by Ngubane's wonderfully elastic rhythm line, developed his own personal and recognisable style. Marubini played both rhythm and lead guitar, creating a uniquely beautiful and almost wistful sound that became a trademark of the Zwino Zwino Boys, the junior Mavuthela instrumental team. The Zwino Zwino Boys featured an almost-exclusively Venda line-up ("zwino zwino" is Venda for "now now" - as in "ultra modern"!). Aside from the late Marubini on lead guitar, the Zwino Zwino Boys also featured his brother Christian Piliso Nombewu on rhythm guitar, Eddie Ndzeru on drums and leader James Mukwevho on bass guitar. Words cannot describe the great melodic back-and-forth of the title track, "Thala Thala", played to perfection by these ultra modern lads. Just take a listen and you'll understand!

Aaron "Big Voice Jack" Lerole had long since given up the strained groaning that shredded his vocal chords by the time he recorded the sax jive hit "Space Age" for Mavuthela. The title was no doubt inspired by the 1969 moon landings but the melody itself actually sounds like sax jive with a slight dash of salsa to me. We previously shared this sublime tune on our compilation Sax Jive Special - Vol.  2 - check it out now if you haven't already done so.

Thala Thala... 12 amazing instrumentals from the heyday of mbaqanga. What's not to love? Download and enjoy! 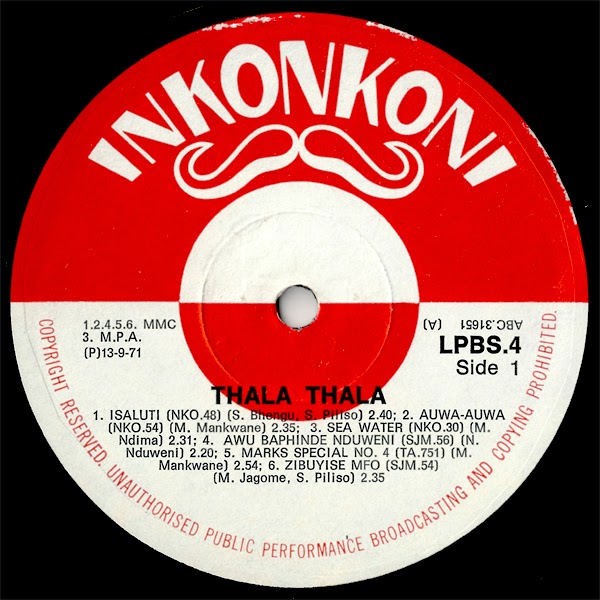 Disco-soul grooves from WIllie and Paul (1982) 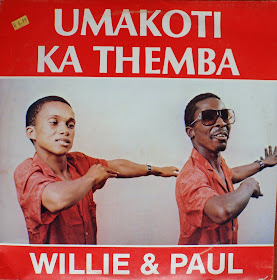 More than three hundred and fifty entries and five years later, it seems that Electric Jive still has some energy and no shortage of out of print gems to revive and archive.

Willie Motala and Paul Hlatshwayo's strong voices have featured previously on the second most popular post ever on Electric Jive: "Disco Soul: 20 Grooves from the 1970s". This album shared today showcases an 80s slickness in production with a lively blending of soul, disco and mbaqanga.

Your comments and feedback have played a big role in keeping all four of us going in those "run out of inspiration, time and energy" moments.

It is fascinating for me to understand who around the world is interested in the music we share on this blog. Of course, internet access and population size do have a big influence in creating the patterns. It should be no surprise that 27% of all visits are from the USA where 267 million people (84.2% of  317 million) use the internet.

Joint second at 10.5% each are South Africa and the UK. Electric Jive's South African audience is the fastest growing, with 13 percent of all page views in the last month.. Only 25 million (48.9% of 51 million)  South Africans use the internet (compared to USA's 267 million). Looking at all the other countries' numbers, relatively speaking, South Africa has the highest proportion of its population that visits Electric Jive.

What does surprise me though, is Colombia which has the eighth most visitors to this blog. Colombia's population (47 million) and internet penetration rate  (51.7%) are very similar to South Africa's numbers. Electric Jive's friends like Fabian Althoma in Barranquilla still have strong African roots in their musical preferences. Check out Fabian's blog Africolombia here. You can read a fascinating  photo-essay on. Barranquilla's sound-system culture here.

Ten countries make up sixty-five percent of visitors to EJ. The other thirty five percent is spread very widely across the globe: 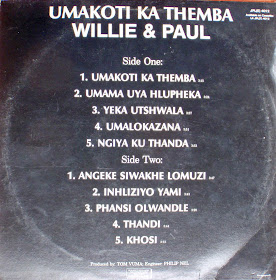 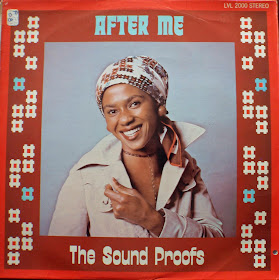 Its always a good time to celebrate Sankie Chounyane, Soweto soul-man with a sweet 70s marabi chill.  Four languid and laid-back Chounyane tracks showcasing  a "jazzy sensibility" backed up by a top-notch but unidentified band. 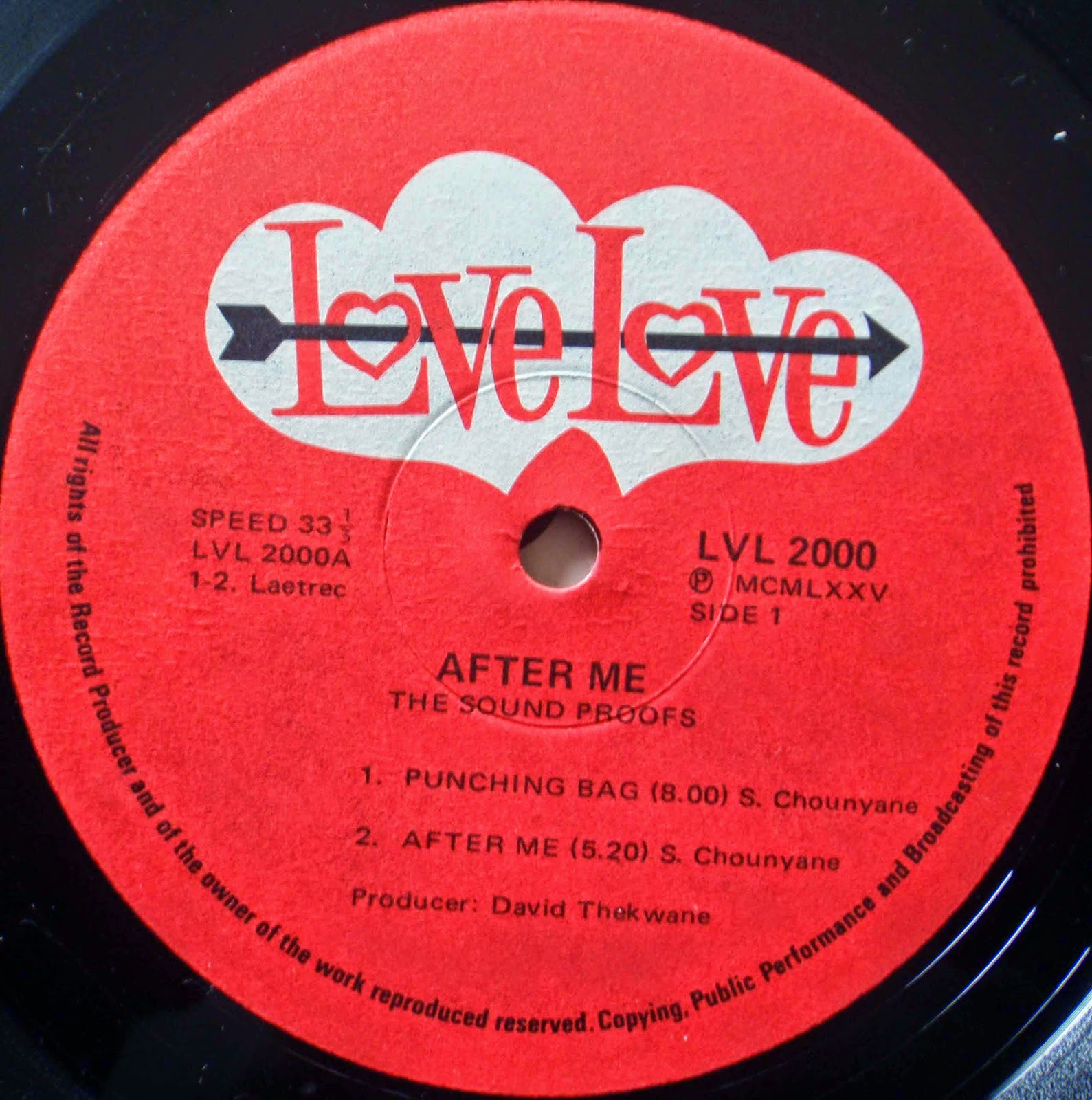 Barney Rachabane recorded with the Sound Proofs - have a listen to that album here. Besides Chounyane on keyboards it is probable that other members of The Movers also feature on this album.

You can find a Movers discography at Flat International here. 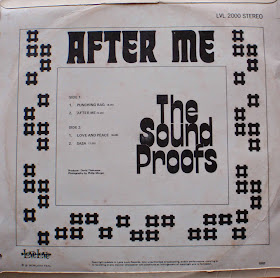 The Moonlight Expressions: How Long (1975) 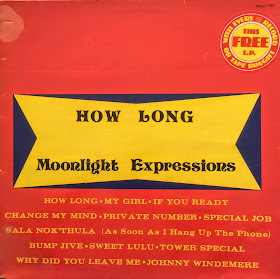 Some gems in this South African seventies soul offering - from Sankie Chounyane, through Sophie Thapedi, to Booker T. Jones. The instrumental cover of the Temptations' "My Girl" worms its way into your ear. Johnny this one is for you. 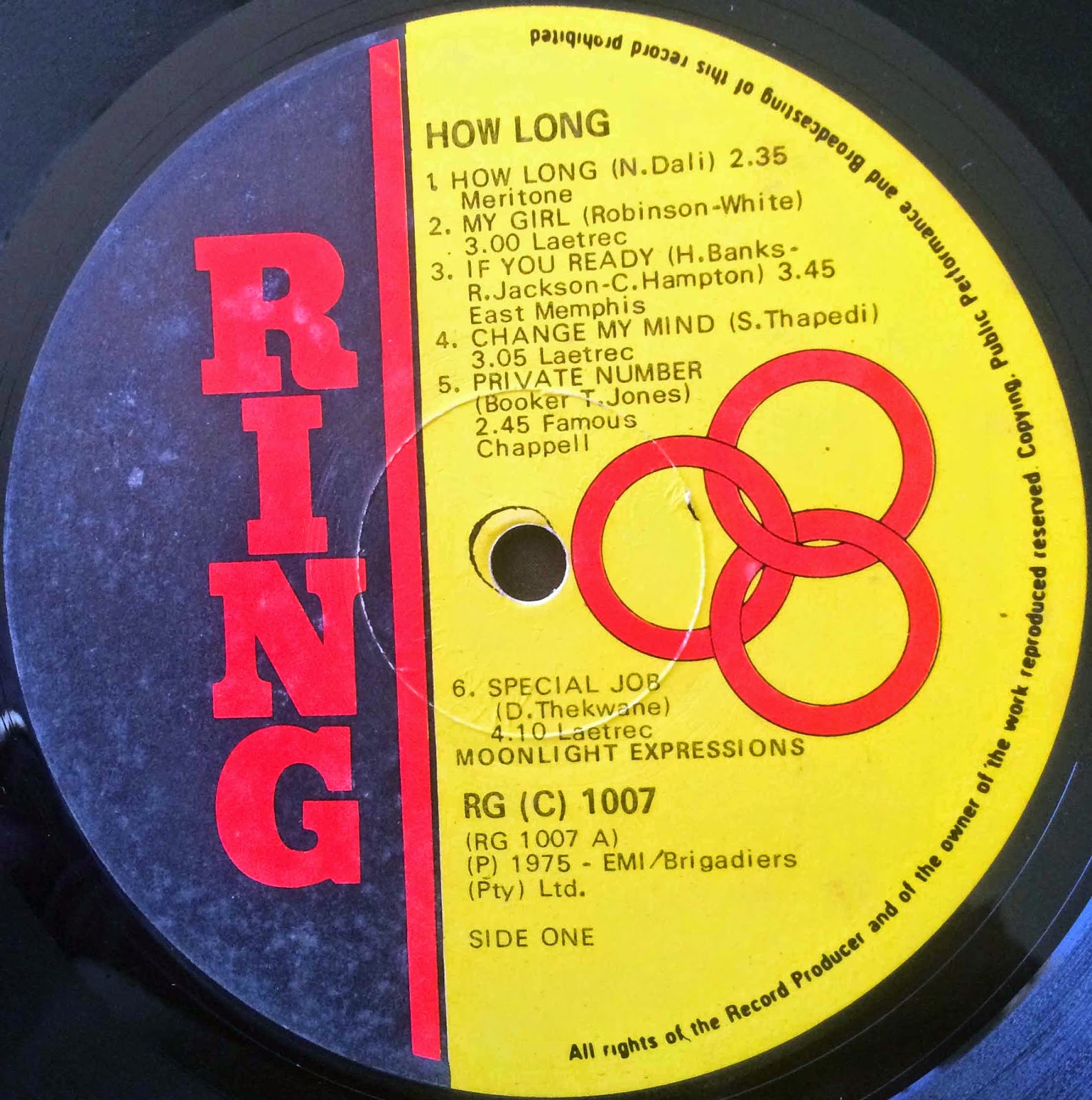 My stand-out favourite is the excellent cover of the socially conscious Staple Singers' 1973 number one "If You Ready". Eleven years after this particular recording was made, Jonathan Butler and Ruby Turner in 1986 turned this same song into a township anthem.

If you enjoyed the Sophie Thapedi and Lulama Legola album posted by Siemon not so long ago - here - this record offers great versions of "How Long" and "Change My Mind".

Quite who comprised the "Moonlight Expressions" remains a mystery. This Johannesburg-based band were popular enough to have records cut in Kenya. To my untrained ear it does sound as if Sophie Thapedi was the vocalist?

Nearly five years ago I shared a pretty scratchy Moonlight Expressions compilation squeezed out of two cover-less damaged records I had found. You can find that here. The recording offered in this post is much cleaner and clearer. 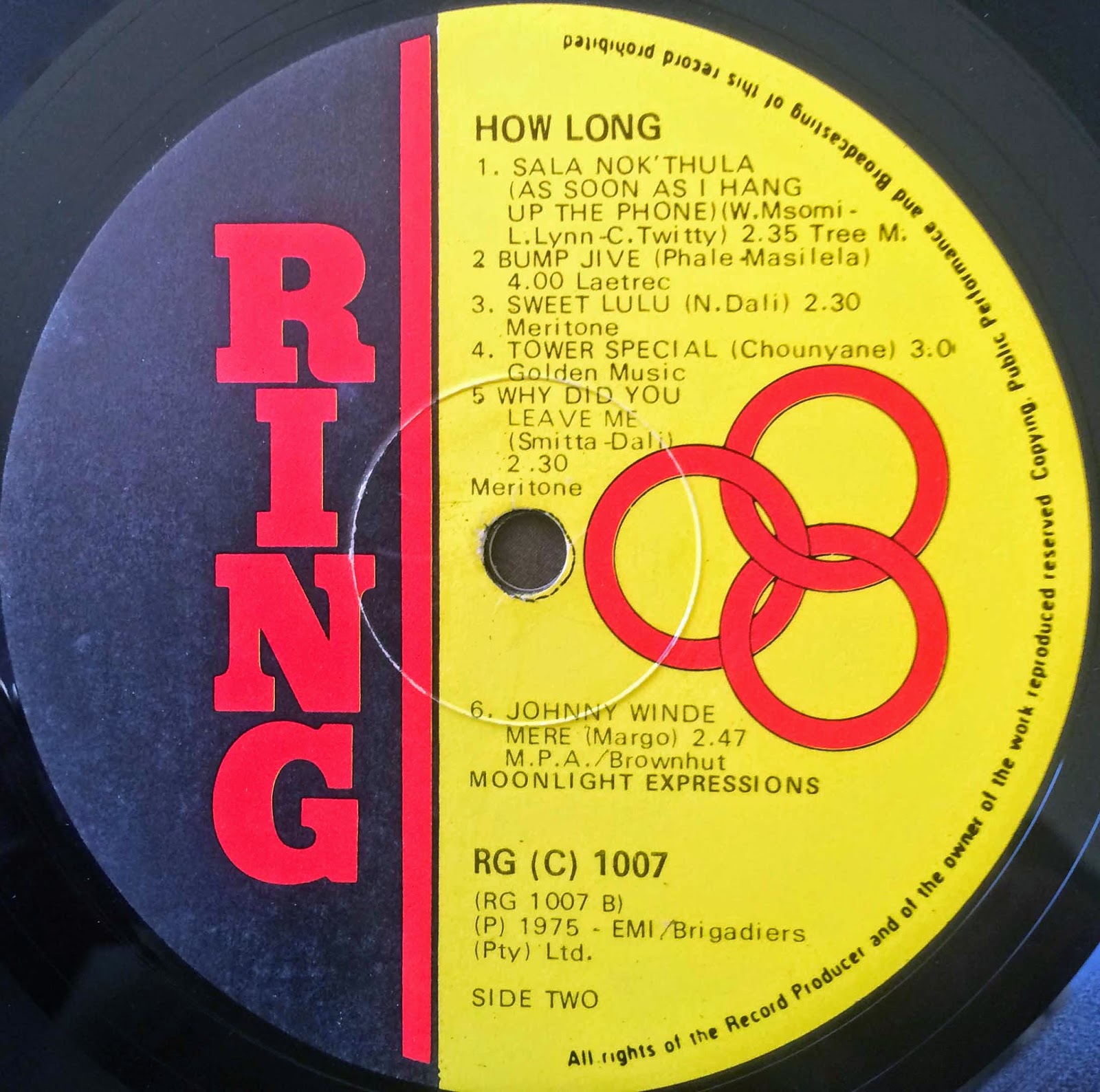 Amagugu with the Intuthuko Brothers (1976) 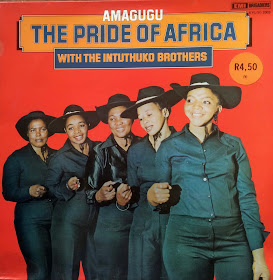 Silky-voiced Sannah Mnguni, previously lead-singer of Izintombi Zesi Manje Manje, heads-up a stand-out  vocal-mbaqanga quintet. The Intuthuko Brothers provide the instrumental  fireworks, with Harry Nhlapo the likely male 'groaner'. This ten-piece outfit is up there with the best - at least as good as the Makgona Tsohle Band and the Mahotella Queens in their prime.

Today's offering is a "best of" Amagugu and the Intuthuko Brothers, happily with only one duplicate from the previously shared Amagugu album. My absolute favourite is the slow and jazzy Uyozikhethela (You Decide). 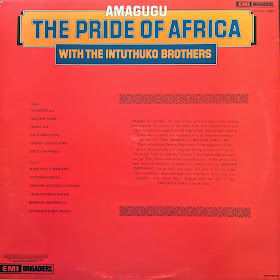