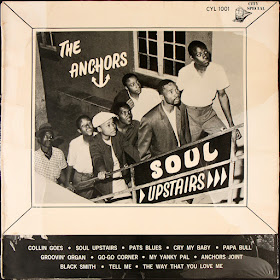 Today we have very special treat, the debut album by one of Alexandra's first soul groups — The Anchors. Under the influence of the Memphis Sound of groups like Booker T and the MGs, organ jive swept South Africa in the late 1960s and the Anchors were one of the earliest purveyors of this style of music. Last Time, a single (not on this LP) by the group, is featured on the excellent Next Stop Soweto Vol. 2 (2010) album, one of the best compilations in recent years.

Soul Upstairs was produced by Ray Nkwe, then the president of the newly formed Jazz Appreciation Society (see JAS Pride label). Nkwe must have played a significant role in promoting this sound in the late 1960s because in the same year he also produced the first album, Soul-A-Go-Go, by another significant soul group, The Beaters (later renamed Harari).

Soul Upstairs was recorded in March 1969 at Herrick Merrill Studios in Johannesburg and issued on the City Special label. The LP appears to be that labels first project unless there is a CYL 1000 out there. Of course this label would soon be famously dominated by another organ driven soul group — The Movers. The album features at least two hits of the period: Collin Goes and Tell Me.

The liner notes reveal that the Anchors were formed in March of 1968 by Ezrom Kgomo and Collins Mashigo (Mashego) after a split in an earlier Alexandra soul group simply called The Soul. At the time of this recording, the bulk of the members were still in school and included Patrick Nkosi (who was 19 at the time) on organ, Anderson Nkosi (18) on lead guitar, Given Sabela (19) on bass, Condry Sequbu (Ziqubu) (who must have been 13 or 14) on rhythm guitar, and Dinah Mbatha (17) on vocals.

On the other hand, according to Max Mojapelo the group was formed by Kgomo and Mashego, but it included Simon 'Bra Jika' Twala on bass, Philip Malela, Pepsi Rapoo on vocals and Herman Fox on lead guitar. Majepelo goes on to say that the group was later joined by Ziqubu, Sabela, Dinah and brother Lucky Mbatha, Mbokoto Nkosi and Jabu Nkosi, son of the legendary 'Zacks' Nkosi. It is not clear to me whether keyboardist Jabu Nkosi is the same as Patrick Nkosi who plays the organ on this recording or which version of the group is the original lineup.

Nevertheless, the Anchors split in the early 1970s with Simon Twala, Philip Malela and Herman Fox going on to form the Flaming Souls, another famed soul group of the period. See their album Alex Soul Menu here at Electric Jive. Condry Ziqubu would soon replace Fox in that group on lead guitar after his untimely death by stabbing. Ziqubu then moved on to the group Harari in 1980. Both Dinah Mbatha and Philip Malela migrated to the Movers. Collins Mashego after becoming an MC would later join the SABC. Mojapelo also mentions that he produced the historic funeral of the late Simon Mahlathini Nkabinde. Given Sabela and Jabu Nkosi would also record with 'Zacks' Nkosi on his classic 1976 LP Our Kind of Jazz (not the 1964 compilation of 78s).

Interestingly at the end of the liner notes on Soul Upstairs, Lucas Molete asks Kgomo if he would like to play with the group abroad and receives this answer: "No, we don't want to play overseas. We want the cats overseas to come here and listen to us. We want them to know that there is something brewing in Africa."

View images and liner notes from the LP in detail at flatinternational. 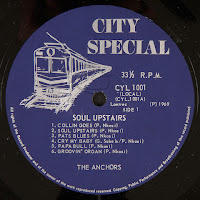