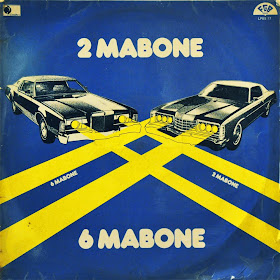 1970s South Africa developed a taste for everything American. In fact, one could argue that black South Africans have always looked towards the African-American scene for inspiration and influence - but particularly into the 1970s, together with the afros and platform shoes, the Chevy Impala became something of a key image for the urban, modern city dwellers.

In 1973, the studio group West Nkosi Nabashokobezi worked up a sensational mbaqanga beat that just had to be recorded. Released on the FGB Producers label in 1973, the hit single “Two Mabone” defined that alignment with the US. The single became a huge hit within South Africa, quickly attaining gold status – the tune was so popular that Gallo Africa issued it for international release via London Records in the US. Before long, jive Mabone – referring to the headlights of the Impala – became the in-thing. A long string of recordings by various sax jivers all helped to keep the trend alive for some two or three years. It may be something of an irony that this typically, uniquely African beat displayed the increasing Westernisation of black people living in the cities of South Africa.

Mavuthela did begin the trend with “Two Mabone”, but were by no means the only black music production company to peddle it to the public. Lulu Masilela, backed by Teal Records' effervescent Boyoyo Boys, recorded “Three Mabone” in anticipation of the great sales that the original recording had received. West Nkosi Nabashokobezi recorded “Four Mabone”, while violinist Noise Khanyile and His Violin gave “Five Mabone”. The Big Bag Boys, led by alto saxophonist Elias Shamba Lerole, gave the public the peppy little “6 Mabone”, but was perhaps blown out of the water by Lulu Masilela’s soulful stomping “Six Mabone”, which became a big hit. Nonetheless, West Nkosi hit back with the great “Seven Mabone”, which added accordion rhythms into the mix. The tunes came fast and thick from all of the major black labels and producers including Thekwane, Bopape and Nzimande... and it was by no means a given that once somebody had recorded “10 Mabone” that the next tune must be “11 Mabone”. In fact, “12 Mabone” superseded “Seven Mabone” and then was followed straight after by “17 Mabone”… the highest number (to our current knowledge) was “Jive Mabone 800”, recorded in 1974 by studio artist 'Mr. Singo'. We can safely assume that there were not 799 Mabone tunes recorded before we got to that one (!) But indeed, just the use of the word "Mabone" was enough to capture the eyes of people (see last week's post from Chris for a nice example). David Thekwane instituted a Teal label named 'Six Mabone' after Lulu Masilela's big hit, and Teal's popular soul outfit The Movers did their own great version of the tune which, in true Movers style, sounded nothing like straight-up mbaqanga!

Not all of the tunes on this "collector's album" (as the liner notes of West Nkosi's Sixteen Original Jive Hits describes it) contain “Mabone” in the title, but all of them are certainly performed in that classic jive Mabone style. Every tune has its moment, but highlights away from the “… Mabone” titles include “Shiluvani”, “Marabi Bell 800”, and “Tonkana”. If you’re a fan of violins – and shouting voices – then I’m sure this album is for you…! 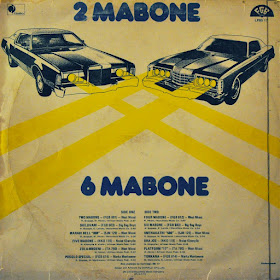