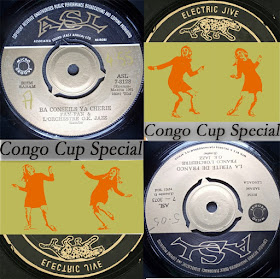 While the Democratic Republic of Congo might not win the African Cup of Nations Football tournament currently being contested here in South Africa, they would be among the hot favourites if the competition was about music.

A continental gathering such as this should be cause for celebration, but there are a few matters that leave me less enthusiastic than I might be: for example, FIFA has presented evidence that four of South Africa's World Cup warm-up matches were fixed with betting syndicates. The inquiry has been postponed. Host cities in South Africa are using tens of millions of dollars of citizen-funded service delivery budgets to pay for staging the tournament, while private investors and sponsors are being guaranteed returns. 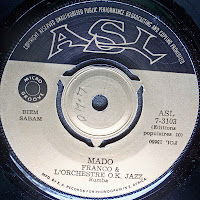 On the bright side, there is chance for fostering continental goodwill among millions of Africa's football supporters, and for chipping away at the scourge of xenophobia that still exists in pockets in South Africa. Fifteen of the continent's best football teams are visiting, and no matter what the circumstances, African hospitality is legend for welcoming and sharing with visitors.

Today, Congo take on Ghana in a group B match. So, what better time to honour what is perhaps the greatest African band ever, one that endured just over 37 years. Part three of the Associated Sounds thread dishes up fifty minutes of O.K. Jazz in five-minute slices squeezed from clean ASL 45rpm singles. You can find the background to the ASL label and postings of Parts one and Two of ASL Congo singles here and here.

Talking of match-fixing, it is not a big leap to arrive at the subject of being unfaithful and the suffering it produces: a 45rpm version Franco's 1971 classic "Mado" is included here. Also included are some popular and some lesser known tracks fronting Mose Se Fan Fan, Simaro, Bitshou, and Youlou Mabialo. 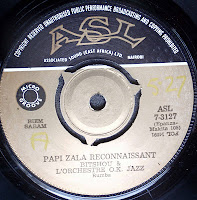 The history and music of this really phenomenal band has been extensively documented. A good related read would be the book "Rumba on the River". Muzikifan's web page on Congo Classics is another good place to start. If you only have five minutes, the wikipedia page will whet your appetite.
Tim Clifford's East African discography site has a growing reference to the extensive ASL catalogue - have a look at it here.

ADDENDUM: In spite of all the difficulties it is facing, Mali blessed South Africa yesterday in more ways than one. They were the first to win a match in this year's AFCON tournament (1 - 0 against Niger) ... and Vieux Farka Toure and his band played a wonderful gig at the legendary Rainbow Restaurant in Pinetown, Durban. Here is a clip of him giving one of his father's numbers the 'Hendrix' treatment.