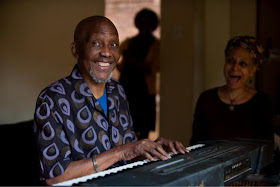 June 18, 2019
Durban, South Africa
Legendary South African Musician Ndikho Xaba has made his transition at age 85.
After a long battle with Parkinson’s disease South African keyboardist/composer and percussionist, Ndikho Xaba passed away peacefully at his home in Durban, South Africa surrounded by family and friends on June 11, 2019.
With a professional career that spanned more than 6 decades this versatile artist and inventor deeply believed that music was in everything and could be played by anyone. As a result, he frequently played on stage, water jugs, bicycle wheels, cans, bells, whistles and gongs in addition to piano, flute, hand drums and his own adaptation of South African traditional instrument Umakweyana (1 stringed bow instrument) His unique style helped to expand the parameters of performance.

His unparalleled musical prowess was used to bring full democratic rights to all citizens of South Africa. As a political activist during the dark days of apartheid in South Africa he was being threatened by the South African Special Branch of Police and warned to stop his political activities or risk arrest. As an actor, he found a way to escape the country via one of Alan Paton’s plays entitled Sponono.

Sponono opened on Broadway in New York City in early 1964, becoming the first African play to do so. He and 10 others from the cast chose to remain in the US joining Miriam Makeba, Hugh Masekela and others who sought political asylum. The arts community embraced them all and they were warmly welcomed by African American artists of all genres including James Baldwin, Harry Belafonte, Ruby Dee and Ossie Davis
.
He continued his musical career when he returned to his beloved South Africa in 1998. He was part of the big band KZN Jazz Legends; and in 2008, they were part of the film “Zulu meets Jazz” which featured himself, South African pianist Theo Bophela and Italian trumpeter Paolo Fresu He was given the Living Legends award in 2011 and the Icons of Democracy award in 2013 by the city of Durban (eThekwini) for his consistent work in the arts.

Ndikho’s music was never widely recorded but one of his songs Emavungweni (down in the dumps) was recorded by both Hugh Masekela and Miriam Makeba. In 1970 he organized a powerful group of musicians including the renowned Plunky Branch (saxophonist) and they recorded an album entitled “Ndikho and the Natives”, which was recently released by Matsuli Records. It has long been called the “holy grail” by music aficionados’. He self-produced a compilation of his work from 1970 – 2005 entitled Sunsets which is available from CD Baby. Fans in SA can leave a message on this page for info on getting copies.

His Home Going Celebration will be on Sunday June 30, 2019 at the family home in Durban, South Africa. Visitation from 7-9am. Memorial Service 9 -11am. Dress preference is white or African formal.
Chris Albertyn at 11:47 2 comments:
Share
‹
›
Home
View web version